My favourite spin-off set in the Catan family is Catan: Ancient Egypt.

It is not just the artwork and theme that I like but also how the game contains three distinct playable versions smoothly within the one boxed set. 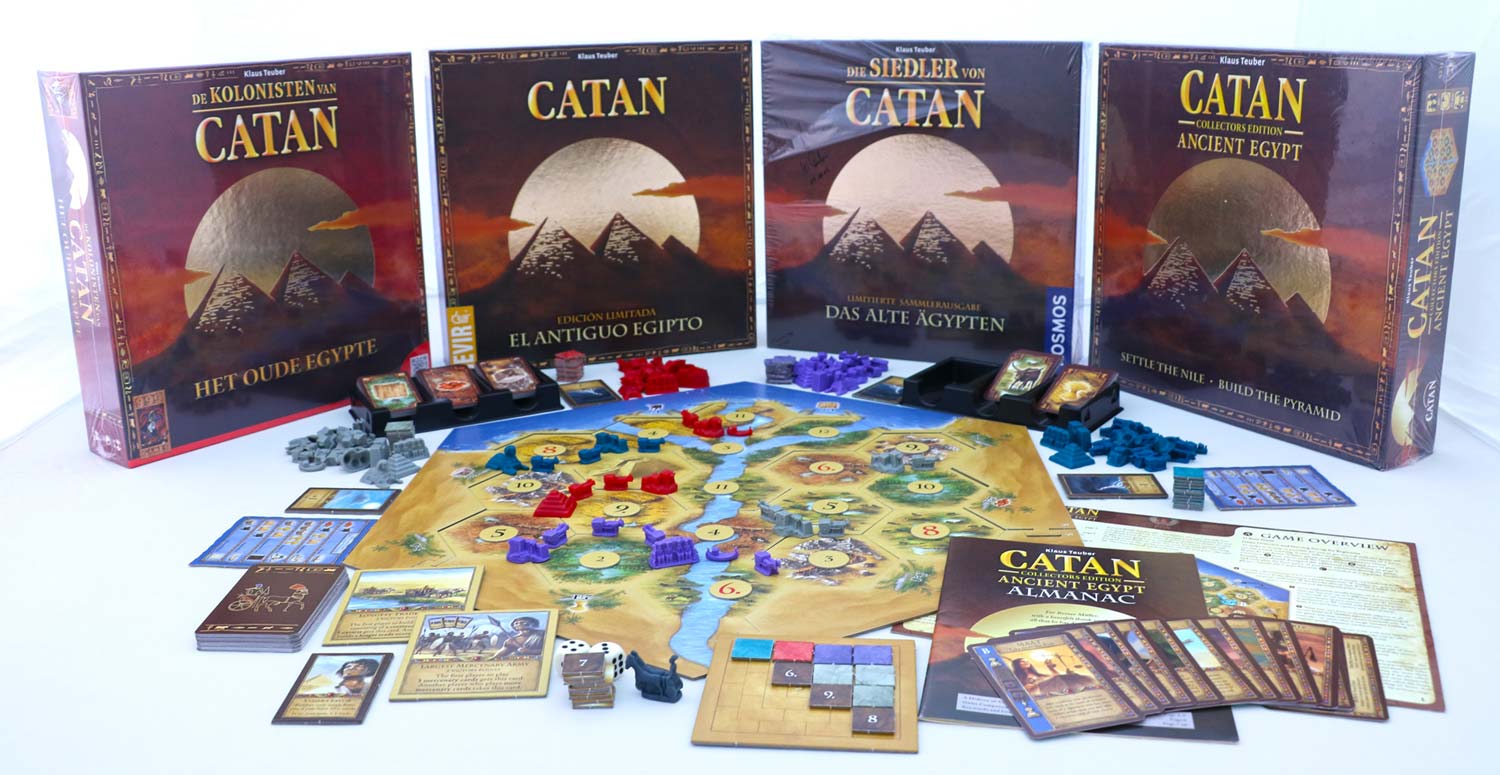 As well as playing just the base game in a different era, you can also choose to cary your play by adding either "Help from the Gods" or "The Great Pyramid" options.

Most often we play The Great Pyramid. We like this option the most as it can end in two very different ways. The first is when a player reaches the points needed, but more commonly than not our games end when the pyramid is finished. A block is added to the pyramid each time a 7 is thrown and as these blocks run down it can be a race to try and get any points possible before the game ends. It is a lot of fun when the bricks dwindle down very quickly when many 7's are thrown. It forces players to quickly change their strategies to gain any points possible before the last "7" is thrown. Our quickest ever game of the Great Pyramid was around 15 minutes and the winner had 6 points.

Help from the Gods is good, but truthfully is my least favourite of the three. At its core this version is similar to adding the standard Helpers to the base set, just with different themed artwork and text. As I rarely use Helpers in the standard game, it is also rarely used when playing Egypt too.

One cool feature of the game is the double sided hexes and border frames allowing you to choose to have the Nile go through the middle of the game. In standard mode you do not need this so the layout is the same format as the normal game, however for the Great Pyramid you have the river and also it introduces the papyrus boats necessary to cross the Nile. This dual hex ability is one of the significant changes from the first Egyptian version of Catan "Historische Szenarien I", released back in 1998.

Catan: Ancient Egypt is not only a fun theme to play, the set has also become a very collectible item. Whether it is to do with how many were printed, but in the past few years the prices for these sets have started to increase. I expect that it will be reprinted at some stage, just as Starfarers and Star Trek have been.

Originally in 2014, the game was released in four languages, English (by Mayfair), German (by Kosmos), Dutch (by 999 Games) and Spanish (by Devir). While I do not know the different print runs certainly the English and German are the easiest copies to find nowadays. I am very fortunate that my German copy is also signed by Klaus Teuber. In my case my Dutch set was acquired from a collection in the Netherlands although it is not often seen for sale. The hardest language to find seems to be the Spanish set. I think this must have had the smallest print run. Without a considerable degree of effort from Spanish speaking friends I still would not have this set in my collection.

In fact getting hold of the set ended up being a very multi-national process. I am in New Zealand and wanted a copy here. I had no joy trying to track one down through my normal channels. Fortunately my friend in Mexico, knew someone who knew someone in Spain who had a copy. They agreed to sell and then sent it to my Catan dealer friend in Germany, who then packed this up with a whole lot of other items I had ordered and couriered it off to New Zealand. With Covid delays and the general hassles of getting everything completed it ended up taking a few months, but when it arrived it was the very first item in the box to be indexed into my collection and added to my display.

The photo here is of my four sets. Interestingly when I was writing this I have not found another photo of the four languages together. I am sure there are other mad collectors like me out there, but I do think it is a rare event to see the four boxes in one place.

UPDATE: Jan 2021 - I have managed to buy another English set of this great game for just US$81 including shipping. I will either keep this as a spare set for when my current play set finally succumbs to over use and too many spilt drinks, or I may look to use this set to make a 5/6 player version of this game. 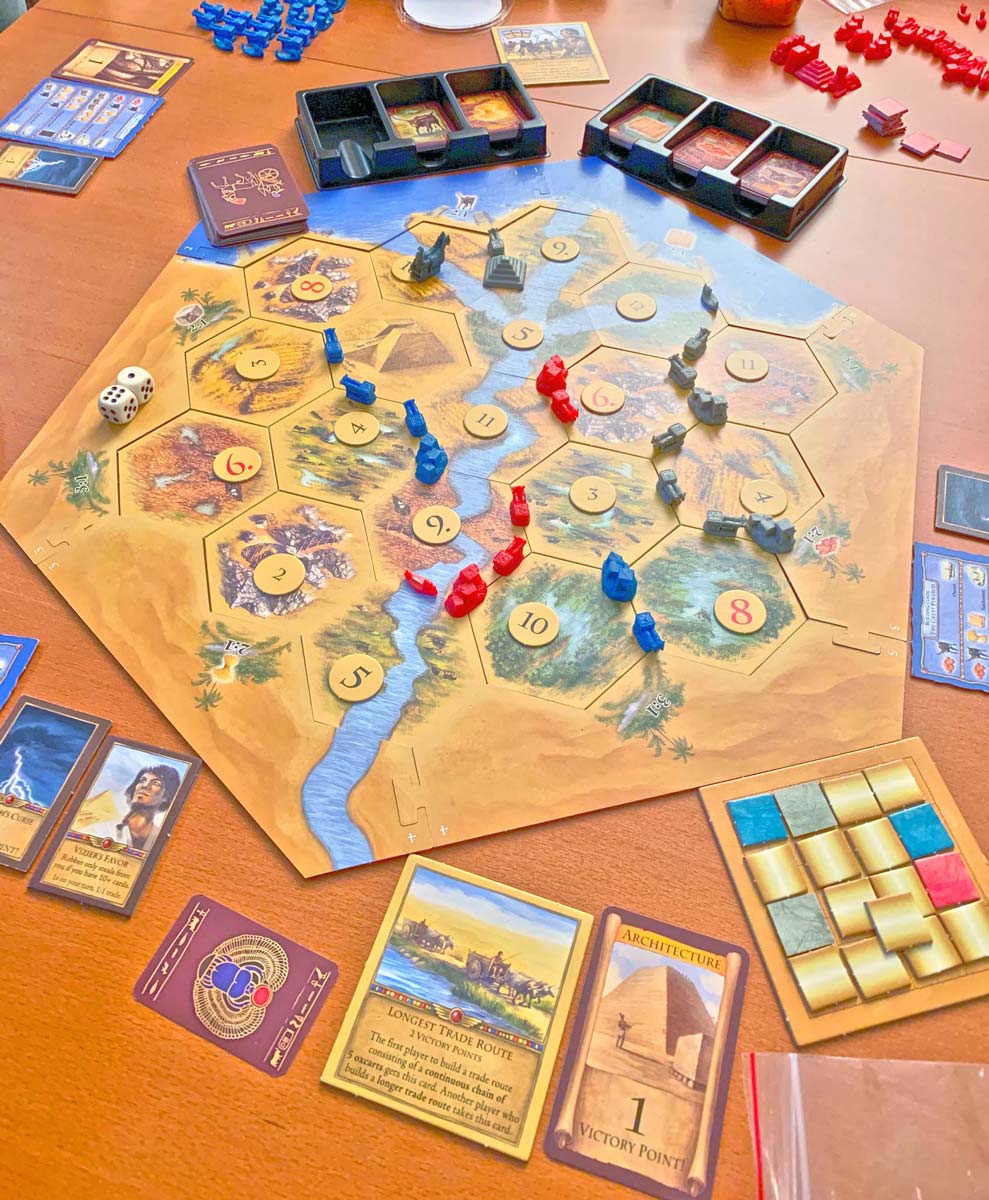