I am keen to build the most complete Catan collection I can.

While my focus will always be the original board game, along with its spin-offs and expansions, I am also collecting the Catan card game, as well as various accessories and memorabilia. While some non-authorised items may appear in my collection, it is not my desire to promote products that detract from or exploit the original game and its origins.

I had originally thought that I would collect only English Catan sets. However, the game is originally from Germany and Germany does have some very cool unique extensions and special release sets. Therefore I decided to collect both English and German sets to build a larger, more complete collection.

Since collecting though I have also built up a reasonable sized Dutch collection, as well as over 70 games from over 25 other countries too. I will add to this when I can but while I would love to collect Catan base sets in every language it has been released in, the cost is simply too prohibitive.

Still to get items

While I am wanting to add as many Catan items as I can find, there are some items I am finding harder to get than others. If you can help me to obtain any of the following items, please email me.

I am also looking for the Brazilian and Afrikaans verion of the base set. 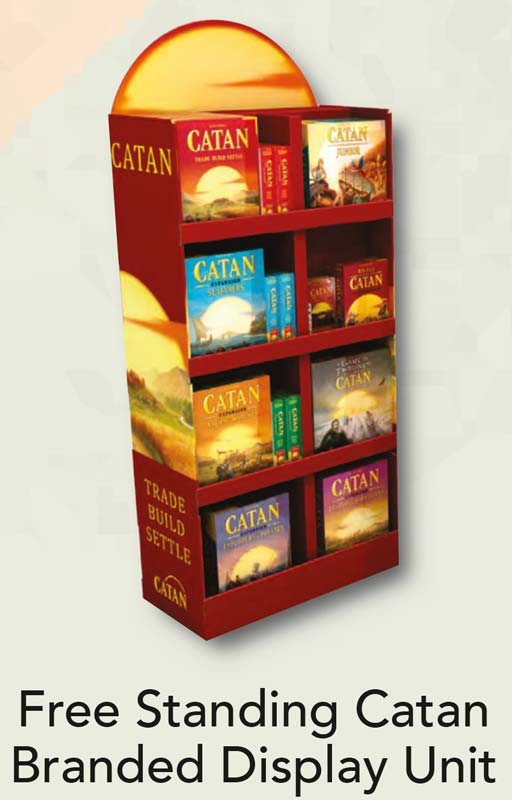 One of the things I am most keen to get is the Catan display stand used in the USA. If any American Catan collectors have one of these I am willing to trade a LOT of items with you for one of these. Or I am willing to just buy it outright. I think it looks super cool and would be perfect to display my 5th edition CS sets.

PS If anyone from Catan Studio or Asmodee is reading this, I will give your company and websites free front page advertising on my site for a year for one of these stands. I will promote Catan on any platform you like and you can even borrow rare items if you want for a display at a convention.