What are the rarest Catan games and why

In a recent Reddit forum I had a discussion about whether the 3D set is the rarest Catan game.

My belief is that while the 10th Anniversary 3D set is often the most expensive Catan product you see advertised, it is certainly not the rarest or hardest to find. There were 10,000 3D 10th anniversary sets created (5,000 English, 2,500 German and 2,500 Dutch) and they were actually good value when sold, given the workmanship and complexity of the components. They are still an extremely popular Catan collectible, but they are also readily available if you pay the price. Usually there are 3 or 4 listed in places like eBay, and Boardgamegeek. So yes this set is impressive, yes it can sell for a lot of money, but is it actually the rarest Catan game?

So alongside the 3D set, I have listed my five rarest items, and want to say why I think they are rarer. 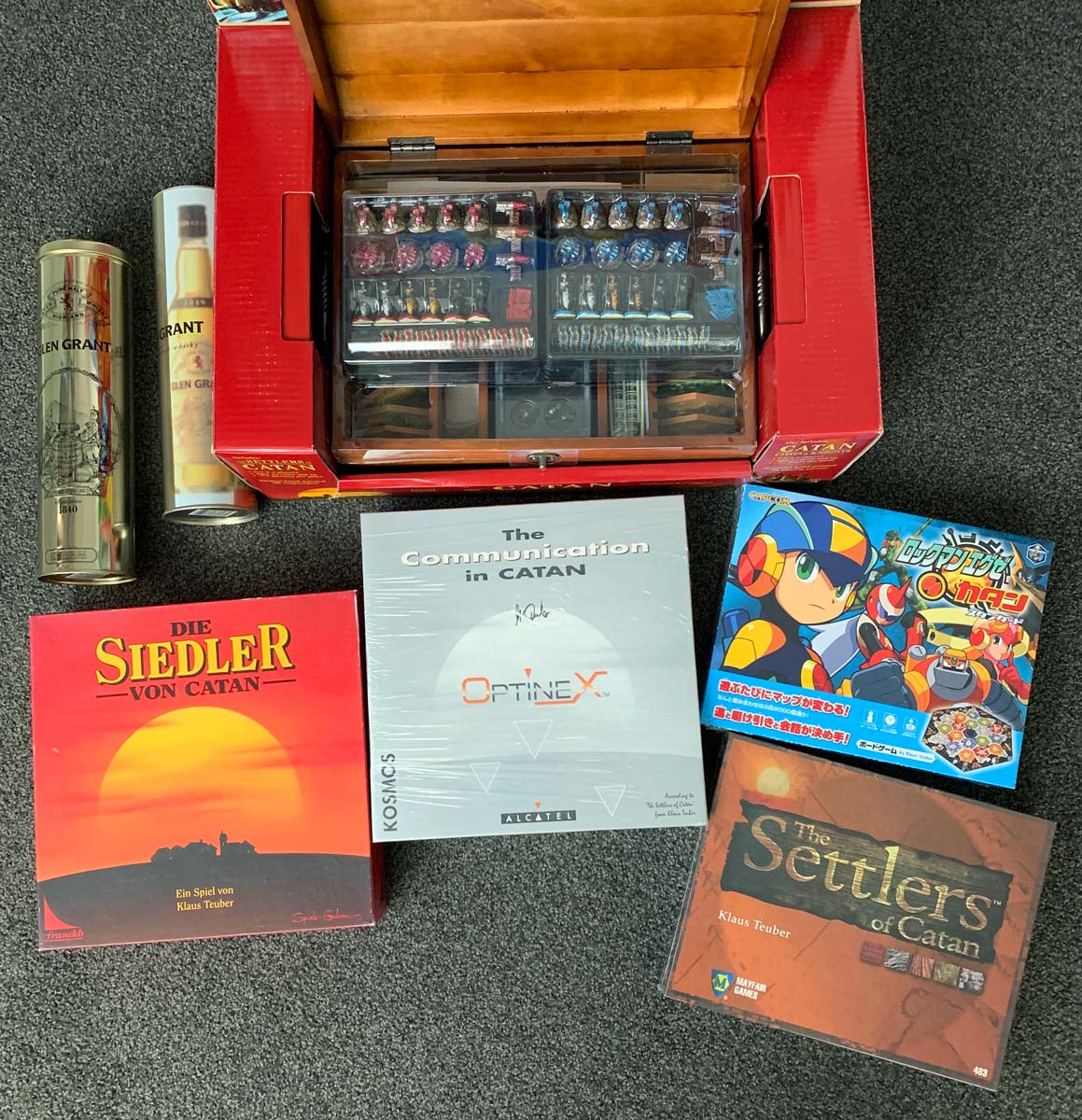 The items I have listed are:

01. The Communication in Catan

I have included "The Communication of Catan" because it was a limited production run and never released to the public for sale. There were only 2,000 copies printed in 1999 for a special expo event in 2000. It is reported up to 75% were destroyed once the event was over. It was also reported that very few sets were given away and that staff took a significant number for their family and friends.

Nowadays sets of this game are rarely advertised and when they do change hands it is often through games dealers or forums. In my own case I only managed to track down two examples, one of which I was able to acquire. With such few examples available I believe this may well be the rarest of the Catan games available.

Values vary depending on condition and usage with some selling for just a few hundred Euros. My own copy is a sealed mint condition set with Klaus Tueber's autograph. If not unique, it will be one of only a few to exist in this condition. So it is not only one of the rarest items in my collection, it was also by far, the most expensive.

This was a special release set for the Japanese market and was released by Capcom in 2005. This version was not the standard Japanese set and is one of a number of versions of Catan that have been released in Japan. I am not aware of the print-run size for the Rockman EXE set, but the set does seem to appear on the market less frequently than the 3D Anniversary set. There is also a small Rockman EXE travel set version available too.

What makes this game rare is that it was only released in Japan and therefore is not common in other countries. You could say then that each language version is rare, but to a collector the rareity is not just the language, but the modification of the core game to fit the Rockman EXE theme.

In terms of price, this game does seem to be relatively good value. While it can be hard to find, when available the cost can be as little as 50 to 75 Euros for a used play set. I have seen mint unplayed sets advertised for up to 400 Euros, but in reality a more realastic top price is nearer 300 Euros. The travel set can be purchased for under 40 Euros.

This was the first limited edition promotional version of Catan. Released in 1997 on behalf of the Glen Grant Distillery the game was not only custom packaged, but also modified to reflect the sponsors product. It featured custom artwork and even contains a little bottle of Whisky too.

Interestingly there are two versions of this limited edition product, both of which are in my collection. The majority of known examples appear to be the first edition standard screen printed bottle on a cylindrical tube. However the second version (and mich more attractive design) is the gold embossed Glen Grant logo tube. I was originally advised there were just 2,000 of this game, but with recent communications it may be a larger number. It is possible there were between 2,000 and 3,000 copies of the first version, but only around 1,000 to 1,500 copies of the second.

So the question is how rare is the embossed case today? How many people opened their sets and played the game, or just drank the little bottle of whisky? It is possible that this particular version of the game might be very rare indeed. Sadly no-one seems to know. When I contacted Glen Grant they were unable to advise on this game as none of the current team were aware of its existence.

This was the very first production release of Die Siedler von Catan in 1995. It only existed for a short period of time, before winning the SdJ award and the game being re-released with the award logo on. From a production point of view both the Franckh set and the 1995 Kosmos set are considered the same edition. From a collectors point of view there is a considerable difference, due to this being the very first issue of the game and the only appearance of the Franckh logo on a Catan game.

But how rare is it? If it was a new game the production run might have been as low as a few thousand to see what the reaction was like. And unlike the 3d set which was bought by many collectors and kept unplayed, a production game was bought to play with. So unplayed Franckh Catan games are now most likely very rare. My own copy is unplayed with the hexes in the original unpunched frame.

This was the first English version of Catan and is now quite hard to get hold of. Obviously as with the first German set, people bought this game to play and over time they also got thrown away. Now over 20 years later there is more interest in Catan and its history and these early sets are becoming more collectible. This also means they are getting harder to find.

I am unsure of the original print run for this 1996 game, but I think it is possible that fewer copies remain than there are 3d sets, meaning it could well be the rarer of the two.

However when all is said and done, owning these items is all well and good and great to have. But what is rare and collectible is not always what is most precious. In my own case I am very proud of every item in my collection, but I am most proud of a small signed postcard. My passion is Catan and I want to collect everything I can, but to have something signed by the game creator Mr Teuber is the most precious item of all.

I welcome any feedback on this article, including suggestions for amendments or corrections where I have details wrong.