In 2006 I bought my first 3D 10th Anniversary Catan set. I still think this is one of the best designed and presented sets ever made for any game. The set comes with hand painted resin 3D hexes, cities, settlements, roads and knights and is set up for 4 players.

For many years I have wanted to expand my set from 4 players into a 5/6 player game so that it could be used even more than it is already. In my collection I have two other 3D Anniversary sets (English and German) and it has always been tempting to use one of these to achieve this. However I have resisted the urge as they are unopened and I do not want to damage them.

So after many years, and in part to celebrate 25 years of Catan, I have bought an incomplete 3D set and am using the bits out of this to make my own 3D 10th anniversary 5/6 player version of the game. 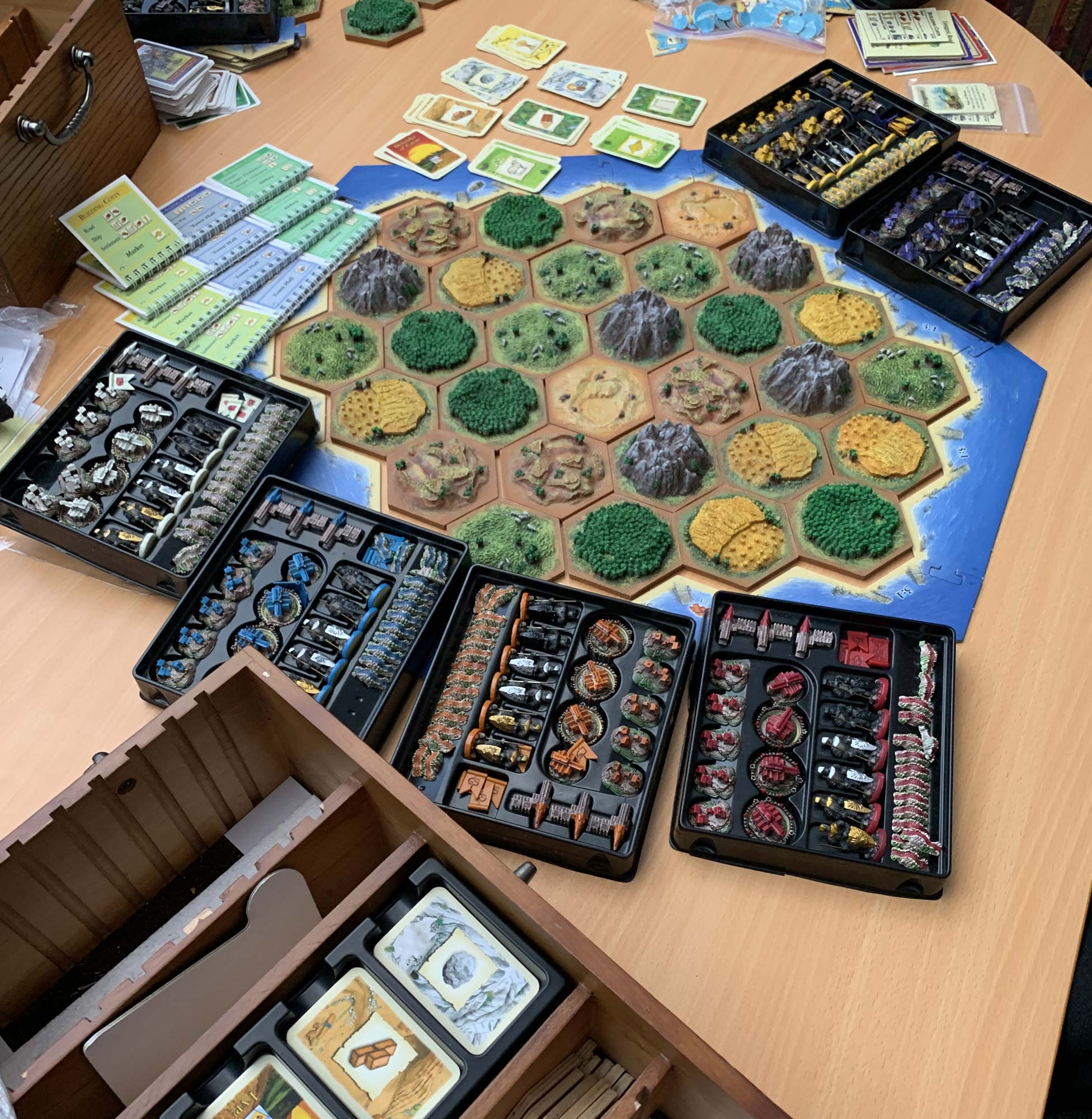 In the used 3D set I have recently bought some bits were missing and sadly added to this some hexes were damaged in transit. However using what was left and some spare 3D parts from elsewhere I have enough to make a full 5/6 player Base extension as well as a 5/6 player Cities & Knights extension. The best part is that in the sea chest there was a full set of original small sized cards that were unused. Whoever originally bought the game preferred larger cards so had bought a set and used these instead of the ones that came with the game. My original cards are getting quite worn so getting a brand new original set is really great. 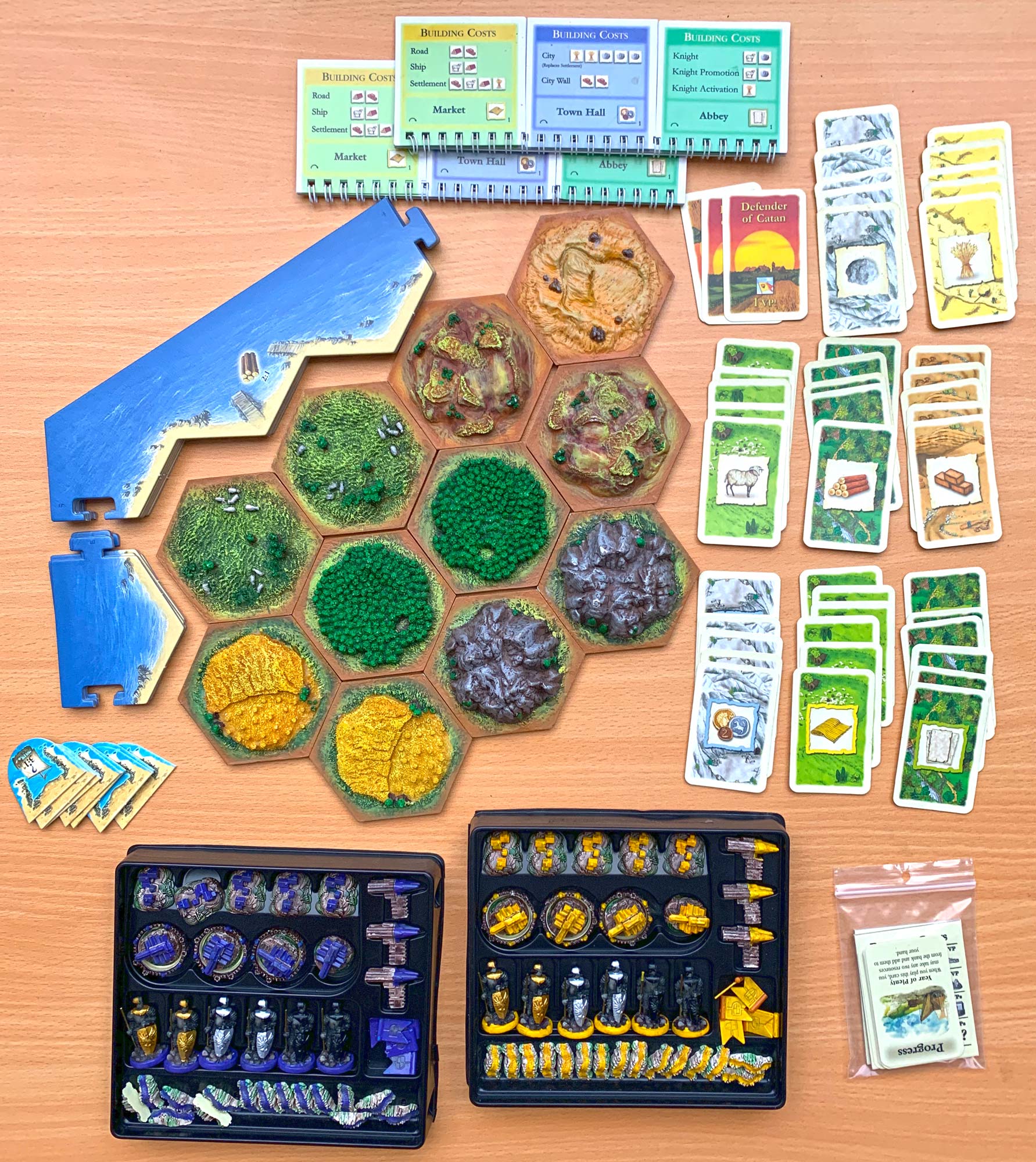 I have included in my larger set the necessary additional cards to play an expanded 5/6 player base game if needed. However it is very rare I play without Cities and Knights nowadays so this will be how I store the game for use.

For the 5th and 6th colours I have chosen yellow and purple, rather than the usual green and brown. My reason for this is that I wanted to tribute the very first English Catan sets from back in 1996. In the original first edition the colours were usually blue, red, yellow and green. While in the second edition were white, purple, black and orange. I have chosen yellow from the 1st edition of Catan, and purple from the second edition. 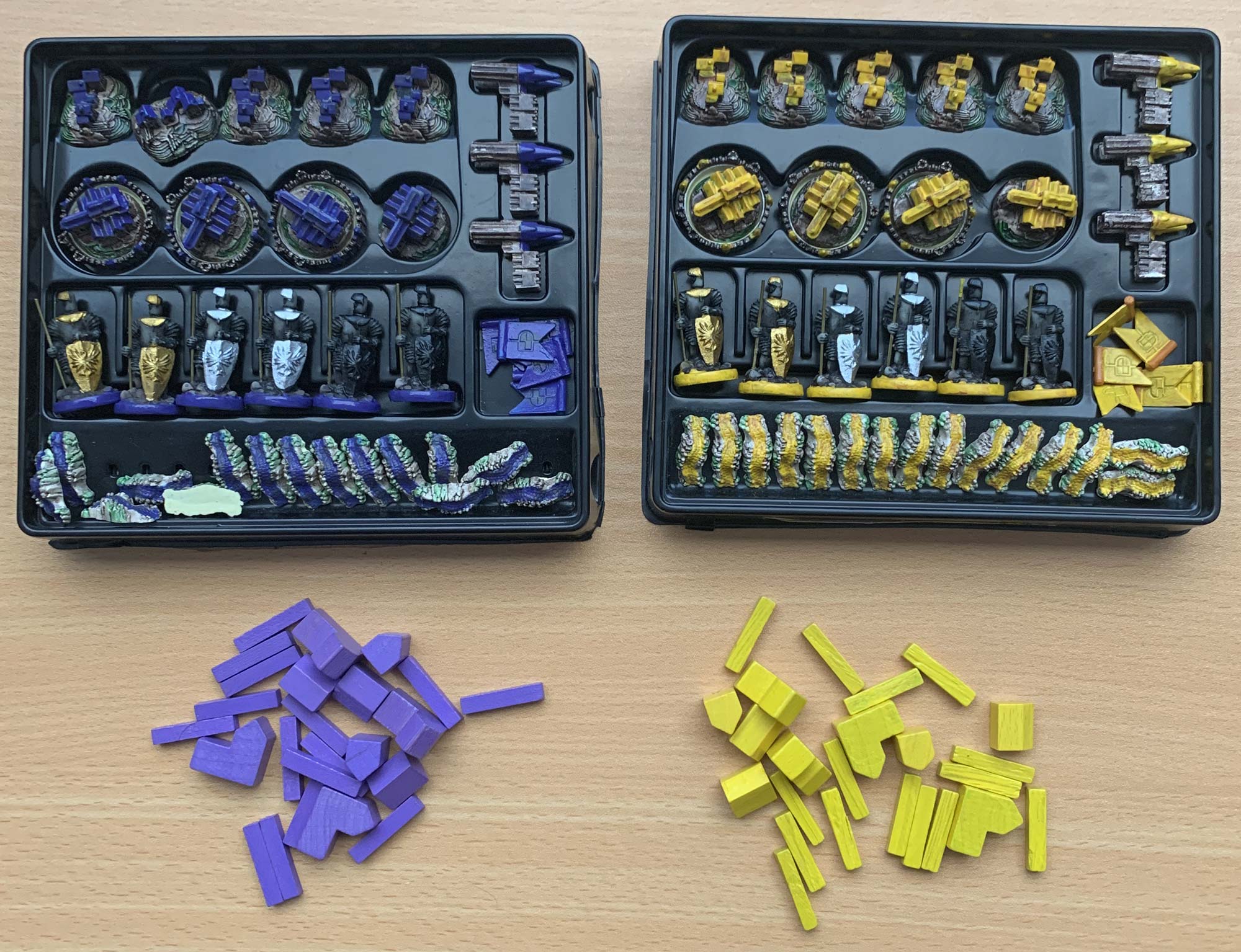 I also had enough pieces to make a 7th set and decided that I would also make a black set too. While black was a colour in the 2nd edition, it is also the custom colour I often play when using a standard Catan set. A black set was more to amuse me than historical accuracy. 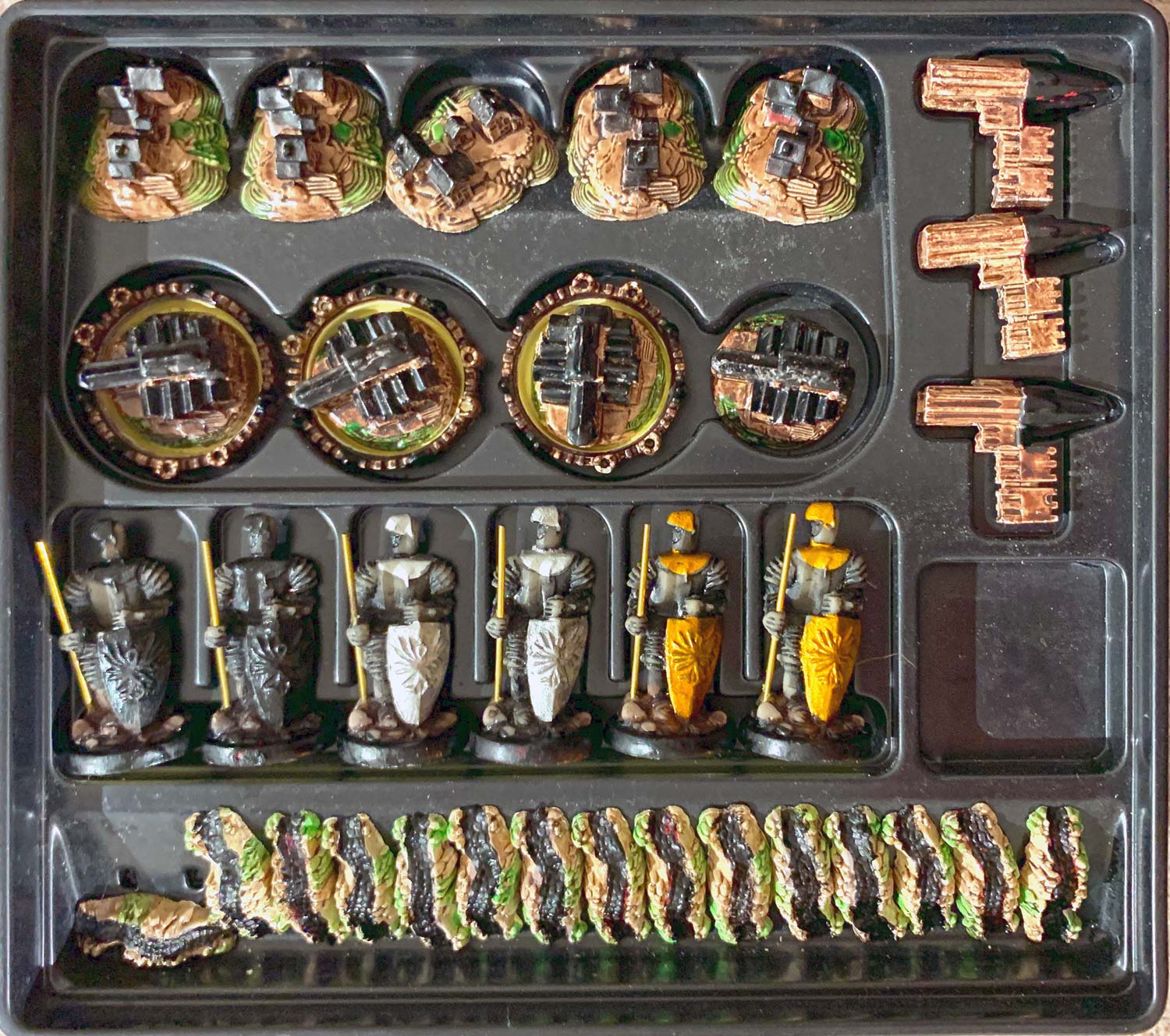 At this point I have grabbed the border from a standard Catan set. it is the wrong size but does the job until I can get some special wooden extension pieces made. Once these are cut I will photocopy the existing wooden border and add these to continue the correct visual effect. I may also look at getting some extra border pieces made so the game can be larger again in the future (see next paragraph).

https://www.catan.com/game/catan-3d-collectors-edition
To commemorate the 10th Anniversary of Catan a special edition was created. The edition features three-dimensional hand painted tiles made of dense heavy weight resin and a complete interlocking border. The special edition encompasses Settlers of Catan and Cities and Knights for 3-4 players. The set is packaged inside a special hardwood case shaped like a sea chest.

10,000 of these sets were produced, with 5,000 being the English version, as well as 2,500 copies each in German and Dutch. Today these are usually the most expensive and most collectible of all the Catan games.

FInally, I have a number of spare parts left over from the creating of this new 5/6 player set. This includes a spare sea chest. if anyone is looking for parts I am happy to help if I can. 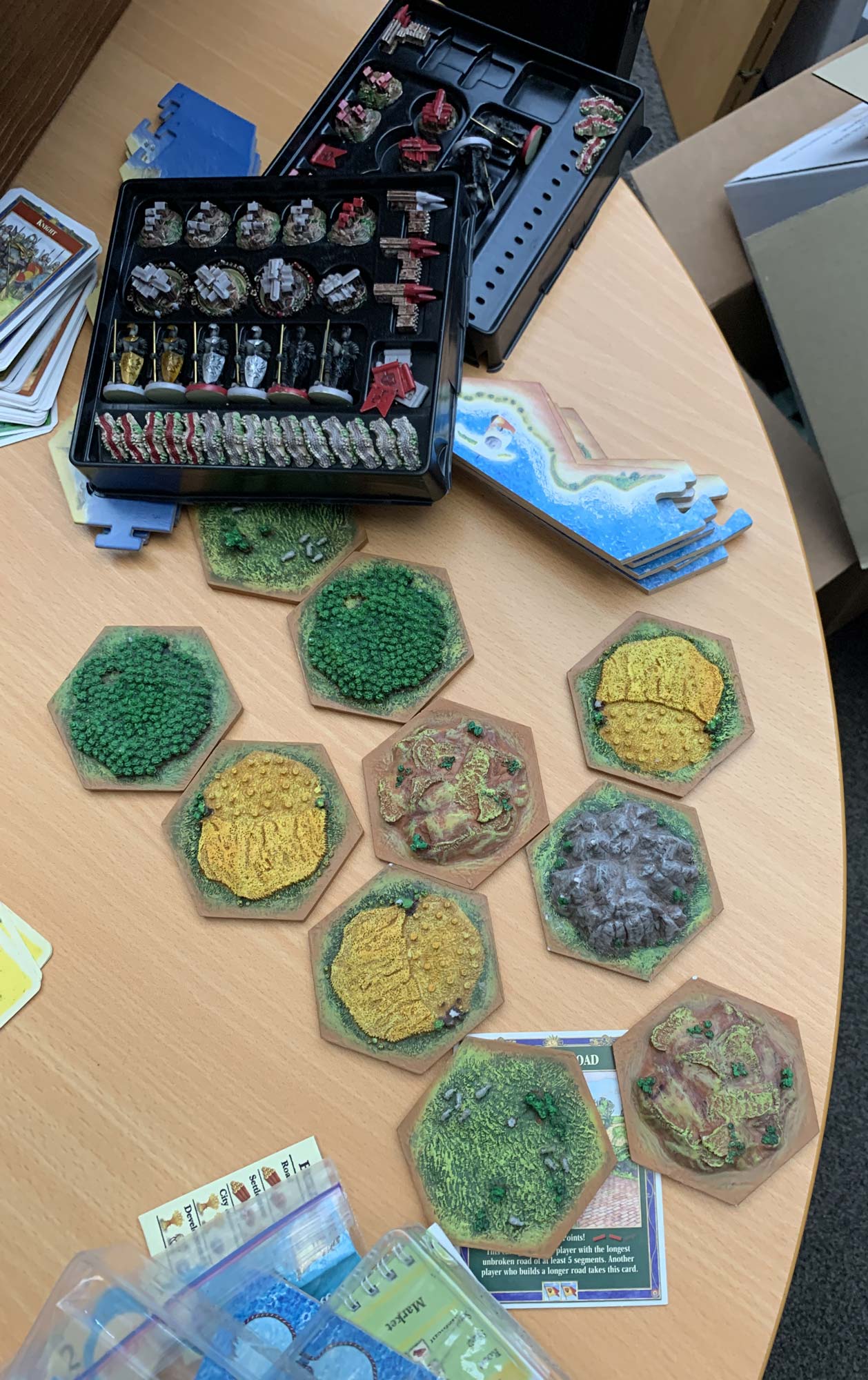 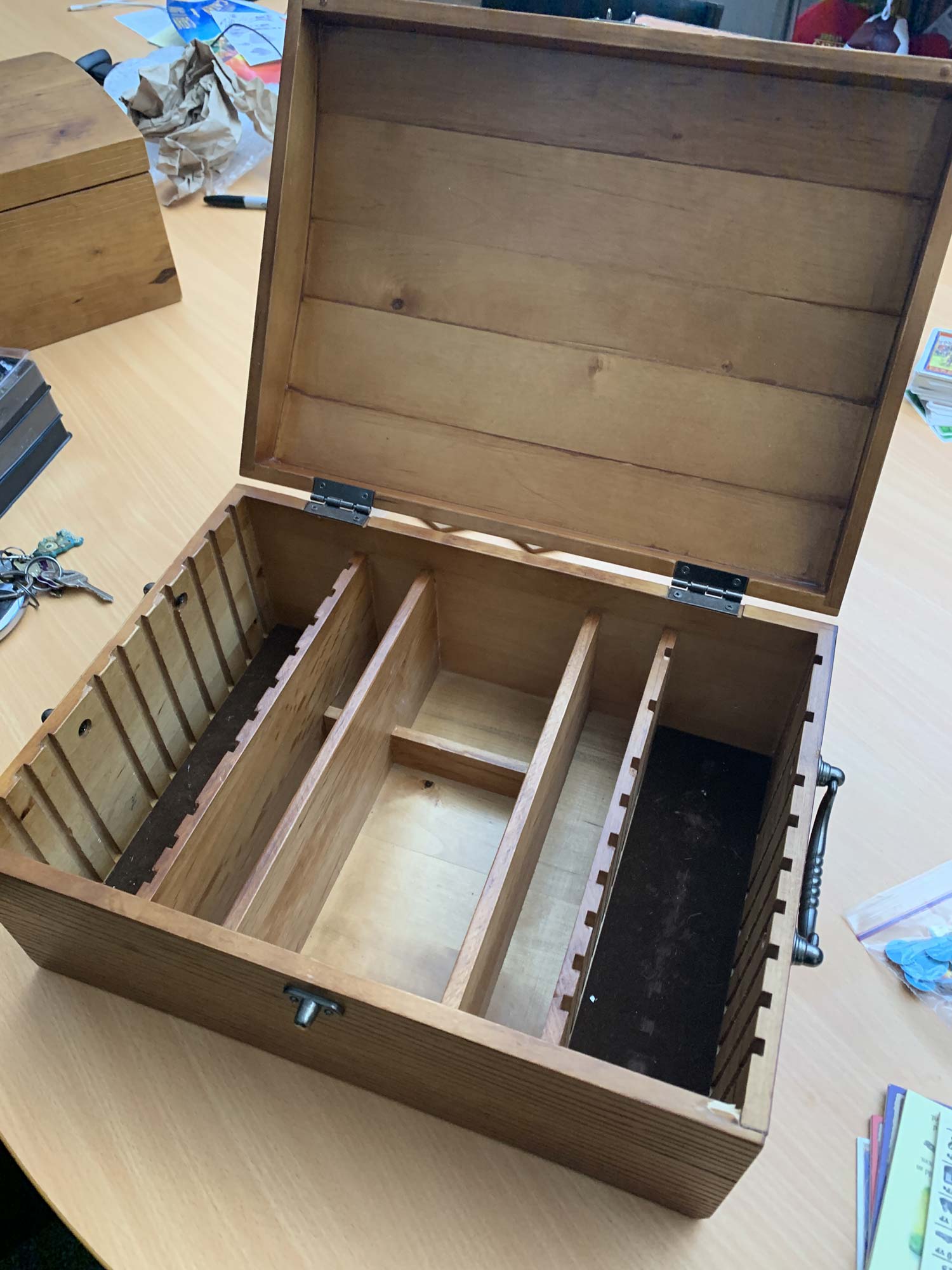