In the early 2000's DDC Games released 4 expansions for The Settlers of Catan.

It does not appear that DDC Games are still operating at this time and it is unknown how many copies of these sets were sold. The four expansions rarely appear on the second-hand market, and when they do the value can be quite high. All four booklets have appeared as downloadable PDF files, but this page does not link to them as the copyright status is unclear.

The first three descriptions are sourced from a German review of the scenarios The source is creditied at the bottom of the page.

The Explorers of Catan Has anyone ever thought about the fact that the settlers settle their landscapes and obtain raw materials from them, but actually don't really research and discover them?

No? Then this extension is exactly the right one. Researchers can now be sent here for 1 wood or 1 ore and 1 wool. These must be equipped. To do this, each researcher receives his or her own hand of cards from the raw material supplies of its owner. Every time it is his turn, a player can put as many grain or wool raw materials into his researcher's hand as he can and wants. These then no longer count towards the seven-card limit and can only be stolen on a single occasion. These resources can no longer be taken back into hand. If the researcher is lost for any reason, his resources / equipment are also lost. Every researcher needs a raw material every round in order to be able to continue his expedition. Each round a researcher can take one of three actions:

He can try to discover the landscape in which he is right now. This is done by rolling the dice and reading the corresponding result. Either nothing can happen, the researcher can get lost or lose his equipment or make a discovery. This is then rolled with the 20-sided dice and only means good ...

Alternatively, he can travel to a neighboring landscape, look for food and with a little luck stock up on his equipment. 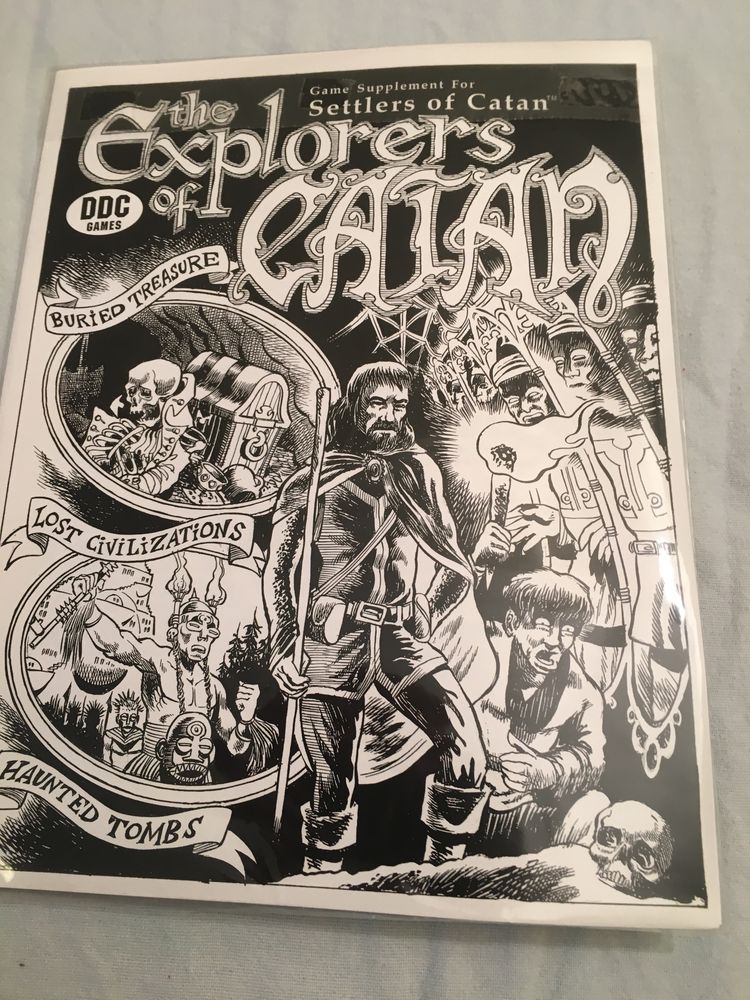 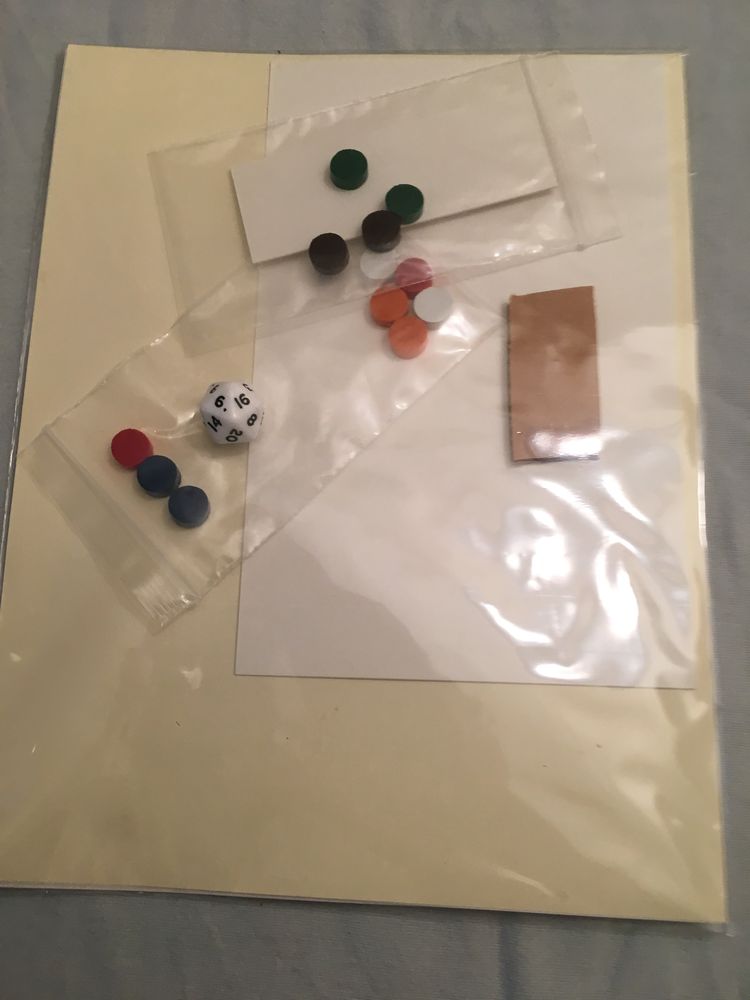 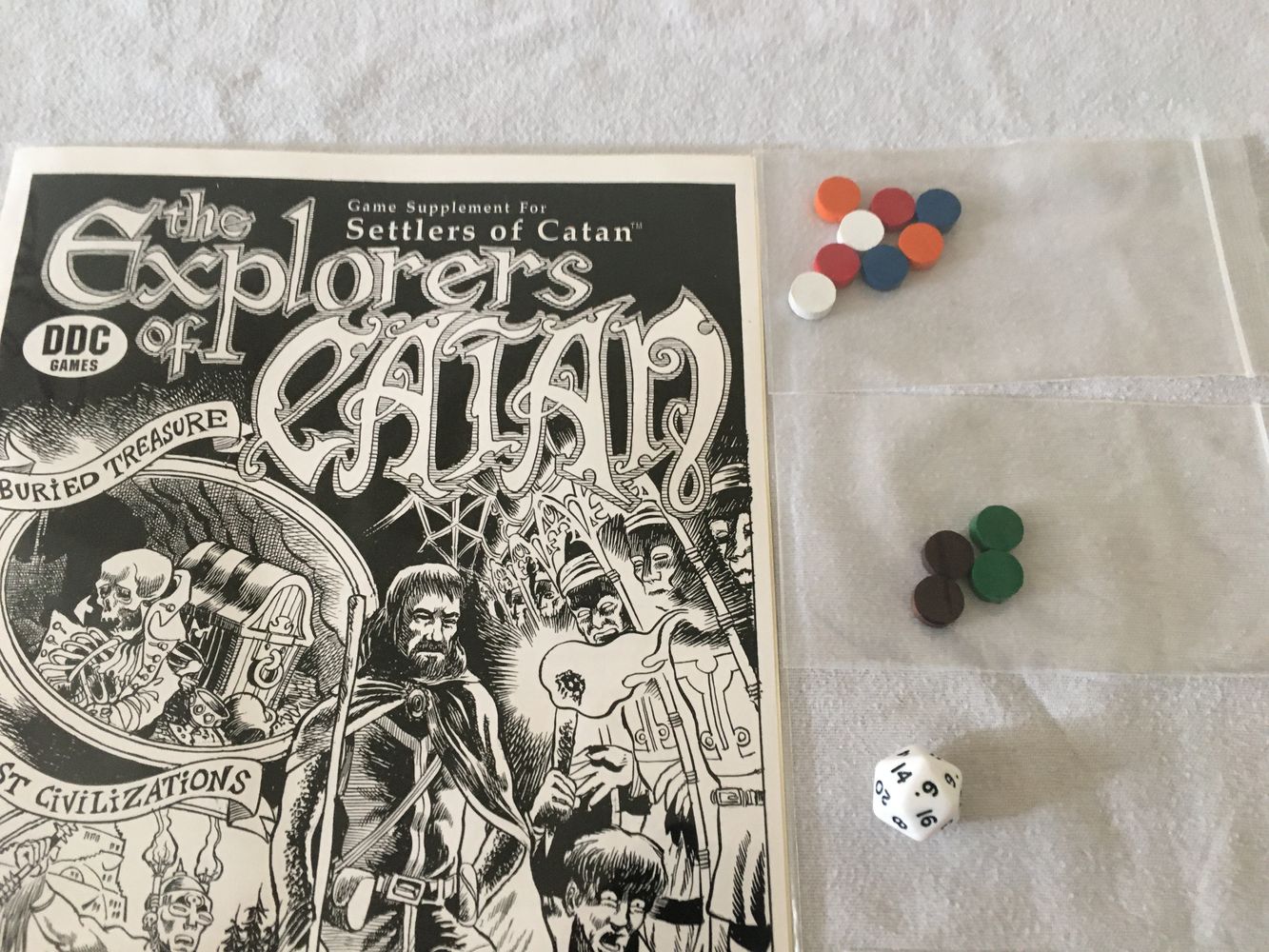 Struggle:
Combat and Politics In this expansion the knights (progress cards) get an expanded role. If you play a knight, you also place a new piece on the game board, which can then protect settlements from the robber in the further course of the game. To do this, he has to swarm out from the edge of the field (of course that costs) to protect a special settlement (or city) on one of the three landscapes. In the normal variant, each player has a maximum of 5 of these knights. These knights can also attack other knights, chase them away or even destroy them completely. And they can, and this is perhaps the most interesting thing about this expansion, even destroy other settlements and cities. This is of course not that easy, but it offers a tactical increase in stimulus.

Politics:
In this part of the expansion, the governor (governor / district president) comes into play. This is chosen by the other players, for the first time when the second city is built on the field. Yes elected, the players can agree on the voting procedure, but mostly the secret ballot will be used. Only players with at least one city can be elected. The governor receives an additional victory point and an additional knight (Governors Army), which he must use as described above (with this he must declare one of his cities to be the "capital of government". During the game, the governor is then re-elected at various times every 3rd city (i.e. when the 5th, 8th, etc. city is built), or when the owner of the greatest knightly power calls for a new election, or when the governor's city is destroyed, a new election is also taken.

Another role taken on by a player is the Port Commisioner. But this is not chosen, but determined as soon as the first settlement is built at a port. The player who owns the fewest port settlements becomes the port commissioner; in the event of a tie, the players can bid for the post via commodity fees. The port officer can (but does not have to) change whenever a new port settlement is built. Each turn, the port commissioner can either move on to a port, participate in the trade in his port of stay by means of port tax (if the port is used, he receives raw materials) or even temporarily close a port completely. This post also offers new tactical possibilities. 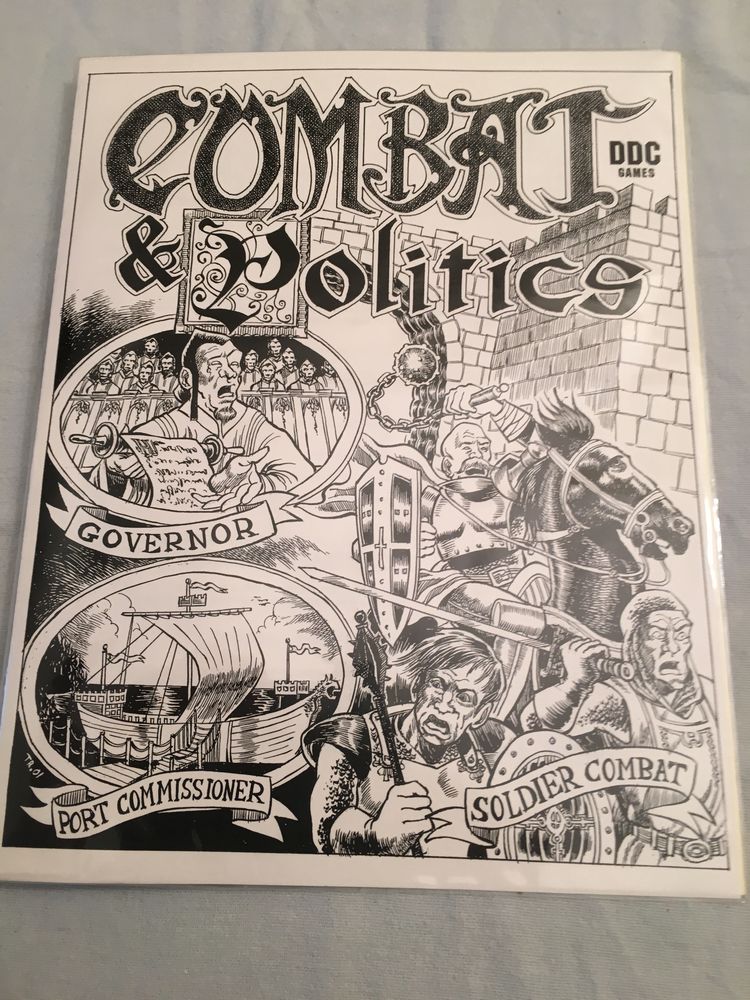 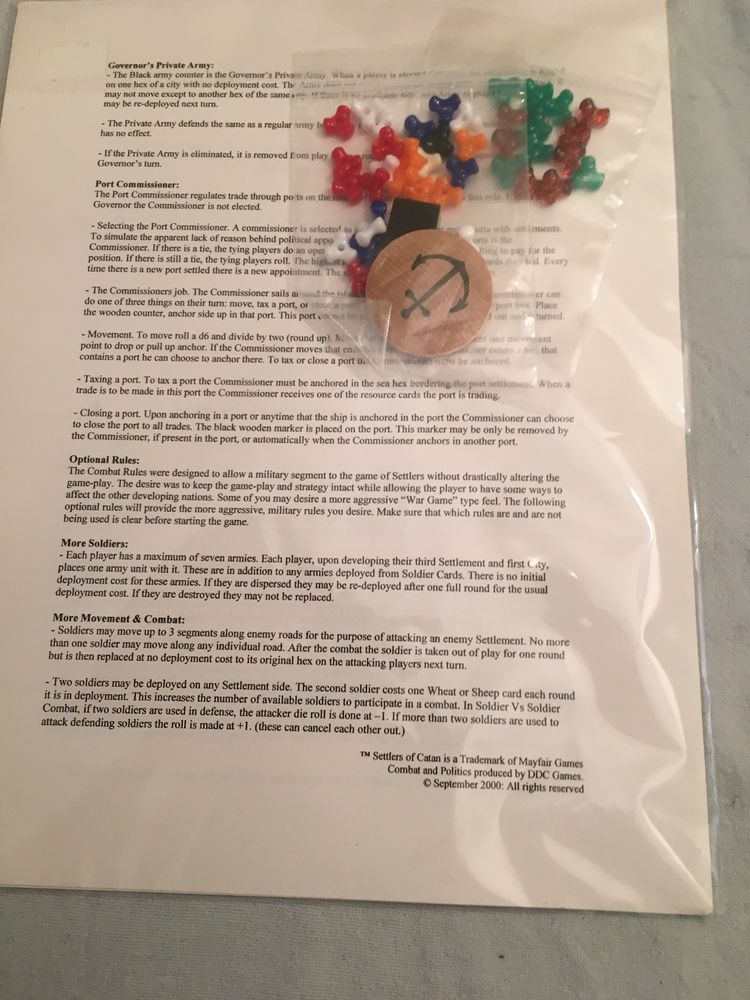 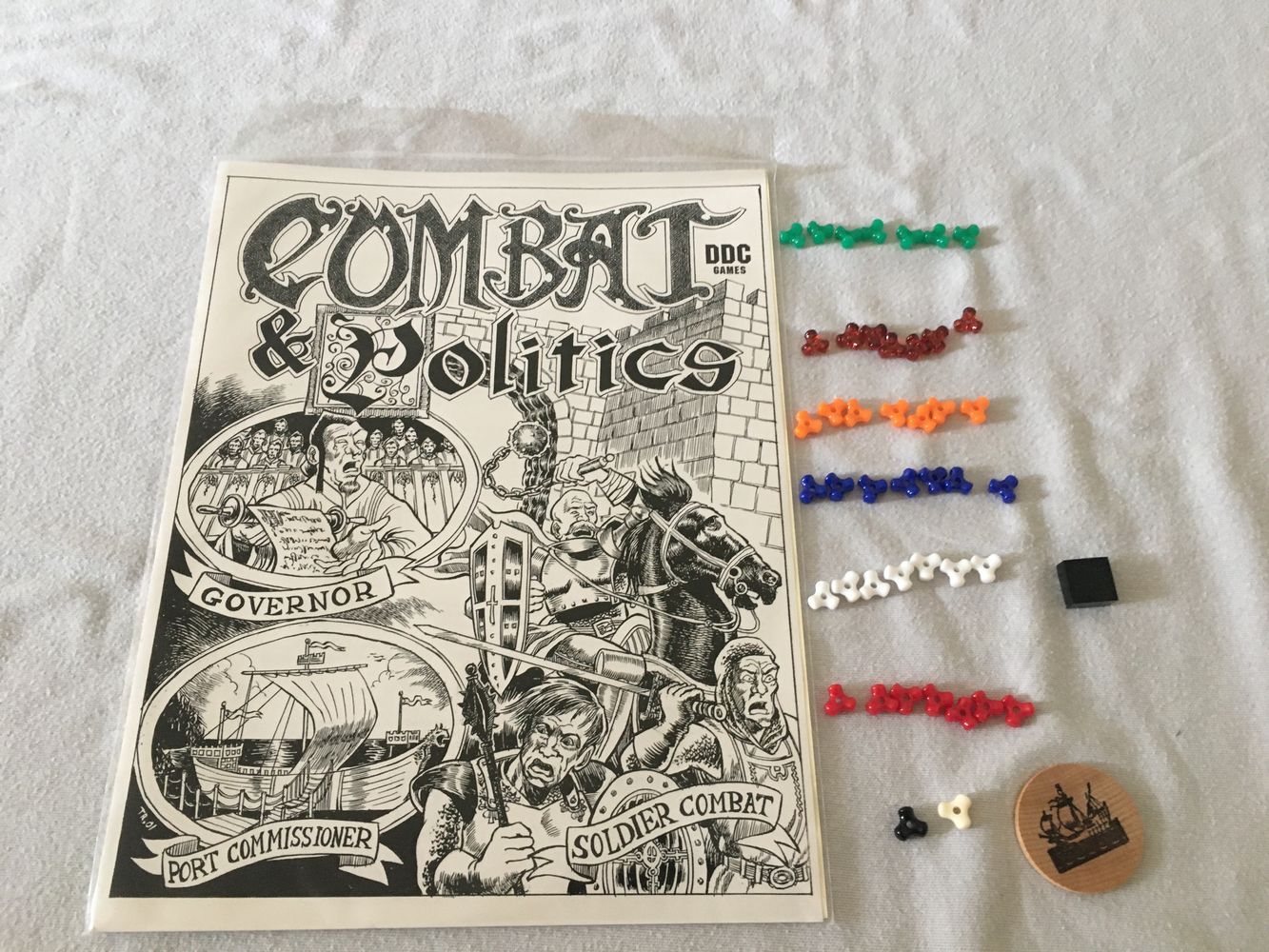 In this expansion, every time a "7" is rolled, an event is rolled in addition to the normal events that must be carried out immediately. There can be a loss of raw materials, the loss of settlements or cities, fertile landscapes become deserts, roads are washed away or knights are destroyed. But raw material gains or free road construction sections can also occur and much more.

In addition, each player who plays a knight draws one of the tokens previously placed in a bag, places it face down next to the knight and can then activate it if necessary. For example, a knight can become a spy, murderer, road builder and much more. become or simply remain a knight. 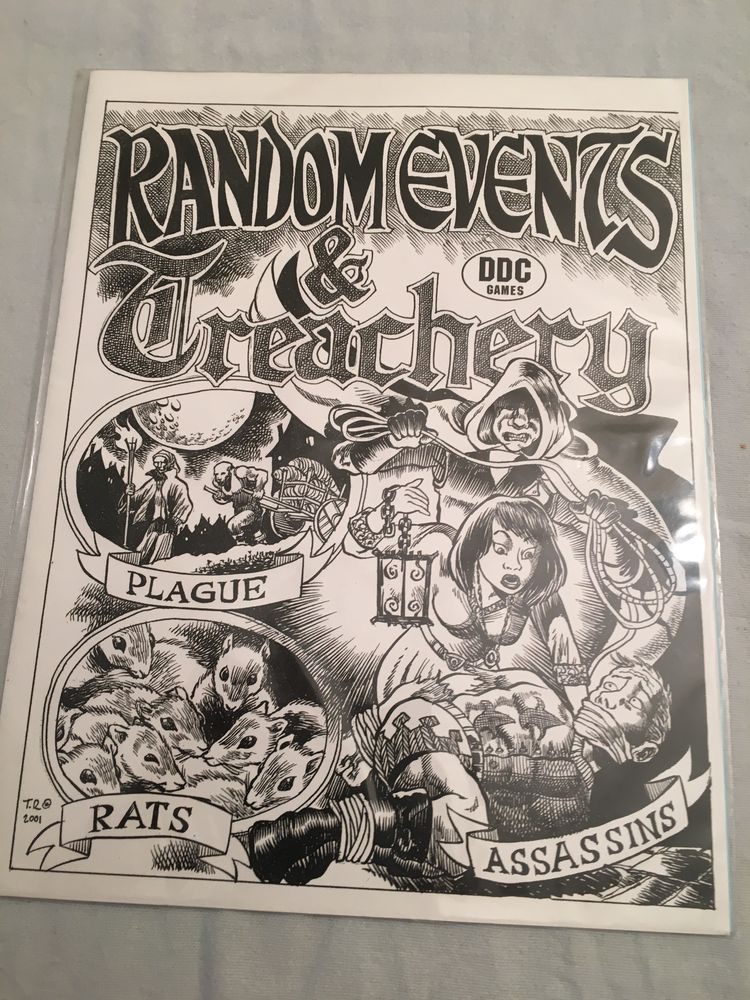 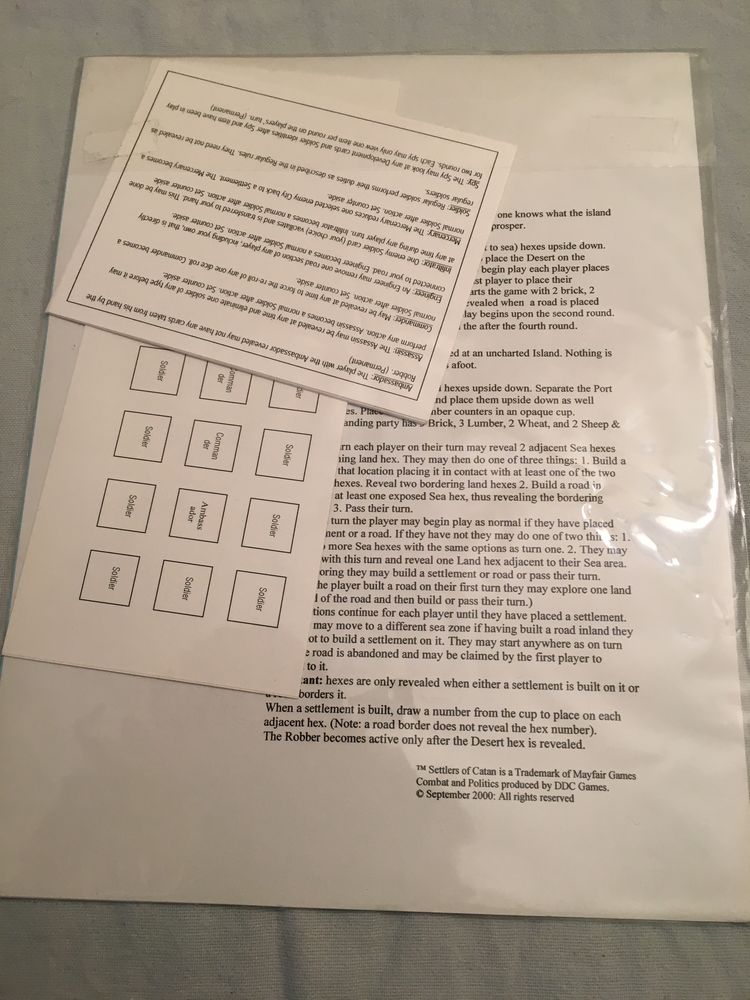 Summary:
Living deep within the scorched wastes of the desert lies the bane of all civilizations. The Dragon of Catan. Tue fearsome beast sleeps quietly upon the top of its hoard, sometimes .. But from time to time the Dragon wakes. Then the monster rampages across the island, laying waste to all in his path. To combat this monster each of the civilizations has recruited a wizard to protect the realm and hopefully destroy the beast. The wizards harvest spell components from around the island, preparing to defend their land, kill the dragon, and perhaps hinder a few neighbors in his spare time. Touring the island is a roving band of gypsies. Seeking wealth, they are always willing to trade spell components for the right price.

Setup:
Place the dragon marker and the Black Pearl (Black Disk) on the desert hex along with the robber. Each player places his wizard on any hex with one of his settlements on it. The Gypsy (purple wood counter) starts on the 2 hex. Each player receives a Spell Book card. The game is played to 10 points. 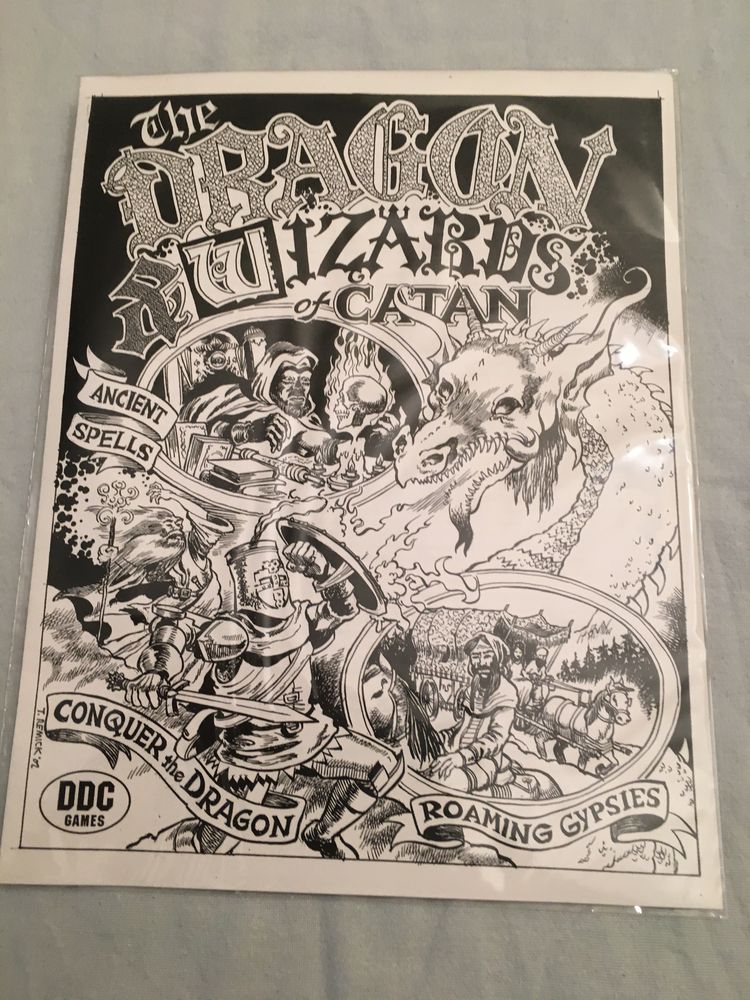 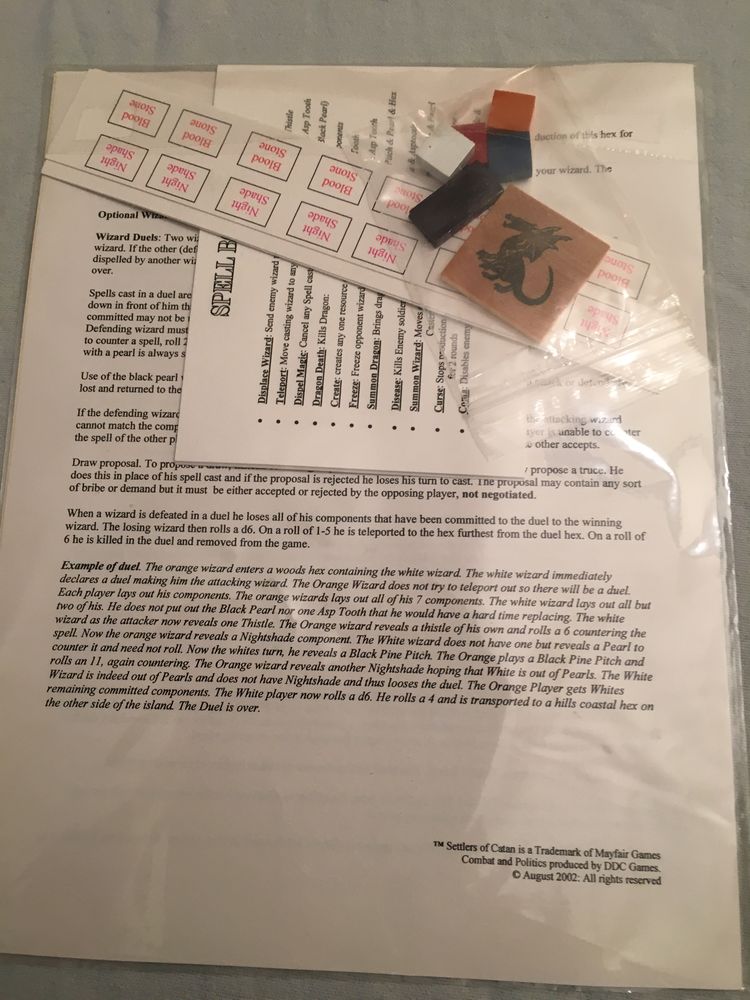 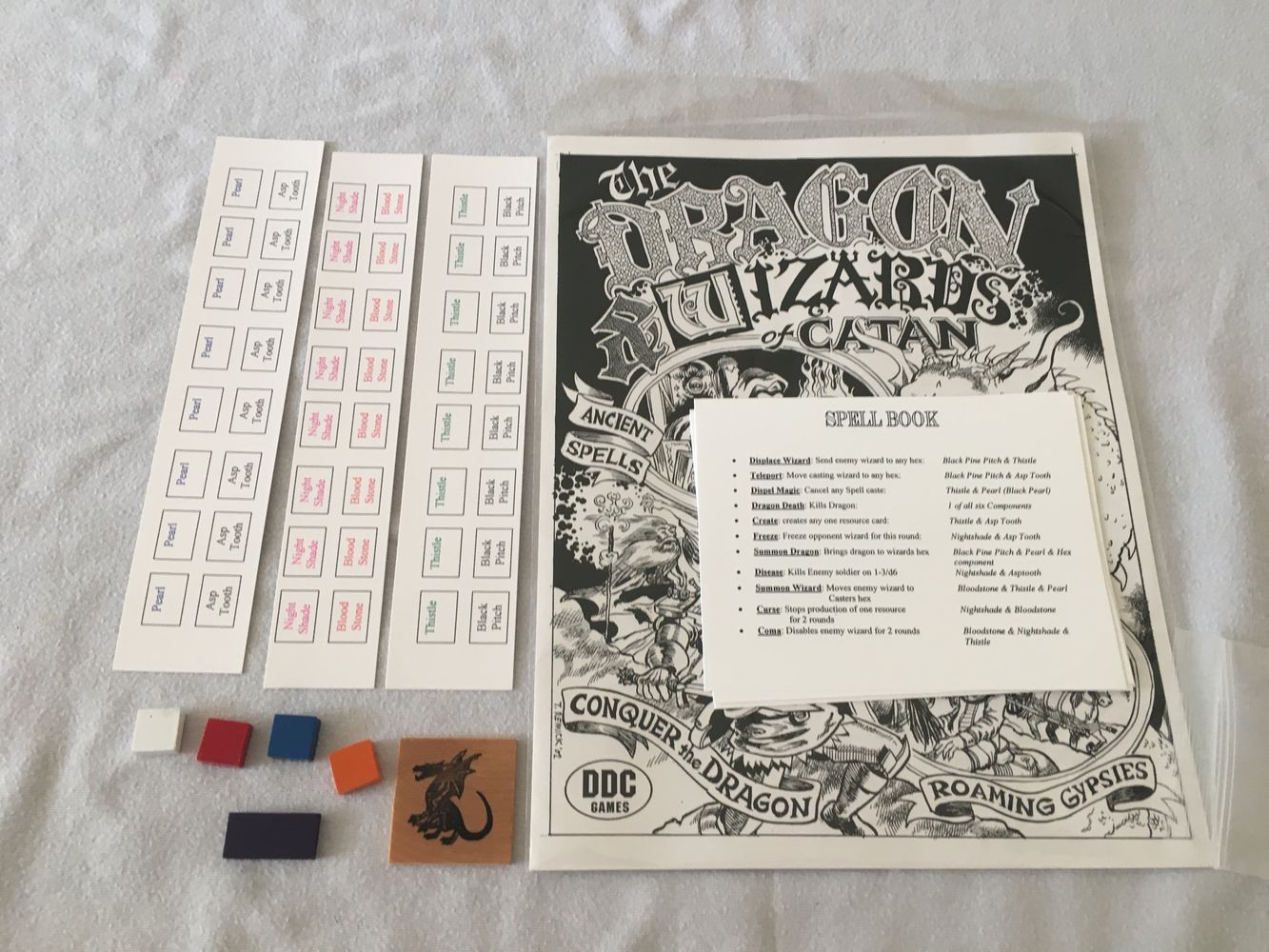 If you are the copyright holder of any information on this page and do not wish it displayed, please email and it will be removed immediately.